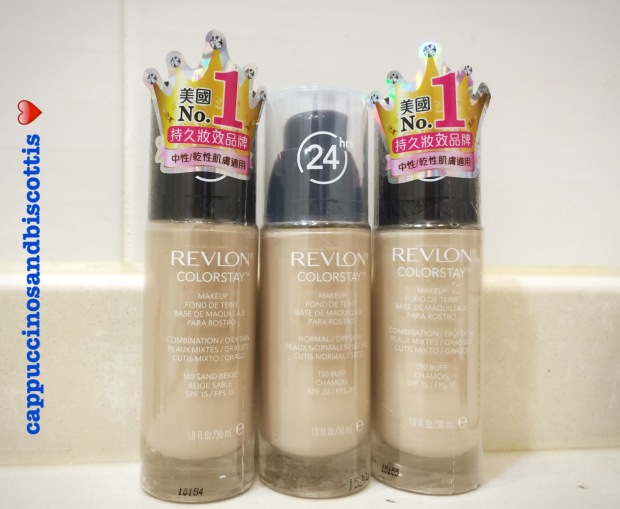 As promised, I’ve got the low-down for the two formulas for my favourite foundation that doesn’t smudge or budge throughout the day: the Revlon Colorstay Foundation in the Normal/Dry and Combination/Oily formulations.

Let’s talk about staying power: it’s still quite the amazing. As consistent with my previous review for the Combination/Oily formula, the Normal/Dry one certainly didn’t disappoint me or underdeliver at this stage. I’ve used this in Hong Kong when the humidity levels were hovering around 65-85%; as such, yes, my combination-dry skin likes this formula a little more for the fall/winter weather as even at the end of the day, my skin still looked fresh with a smidgen of the (usual) shininess in my T-zone area. I’m waiting to try this out when I’m back home in Vancouver and a short trip to Vegas this winter to really try the formula out in much colder and drier climates.

In terms of shade matching, the 150 (Normal/Dry) leans towards a more neutral tone than the 150 (Combination/Oily), and for my tone, I can actually use the 150 (Normal/Dry) on its own without having to mix it with another foundation as I had had to with the 150 (Combination/Oily) as I felt that it was just too…cool-toned for me; it makes me slightly washed out if I happen to forget to put on blush or my lipstick is just a smidgen too nude-y pale.

I’ve tried layering this foundation on top of a variety of products over a series of days to gauge how the formula would perform: BB cream, CC cream and a good ol’ makeup base.

For the most part, neither the combination/oily or normal/dry formulas oxidized on me but I can safely say that for the cooler/drier months, I’ll be reaching for the normal/dry formula more often just for the extra boost of hydration.

Now, as noted above, I also picked up the 180 Sand Beige in Combination/Oily only and not the Normal/Dry formula. The reason is not because of the price but rather, because of this:

The colour is so red and off (for me) that I thanked my lucky stars that I went against what I wanted to do — grab the 150 and 180 in both formulas and speedwalk right to the cashier — and I stood there and did a swatch of the four foundations (two for each formula). Lo and behold, the shades were not what I expected.

I picked up the 180 Sand Beige so that I can create my own foundation shade, depending on the season and my tan — or lack therof — situation; I’ve been mixing the 150 (Combination/Oily) with the Bobbi Brown Skin Foundation as noted in my original Revlon review. Even after I’m done mixing the 150 Buff and the 180 Sand Beige with the Bobbi Brown Skin Foundation and the Le Métier de Beauté foundation respectively, I can still mix the 150 Buff and 180 Sand Beige together to create a good shade for me.

I know it sounds like a pain in the butt and possibly expensive to some of you to mix two bottles of foundations, but it really is worth it when you a) have just the right tones and undertones for your particular shade and b) your foundation doesn’t budge, cake, smudge or oxidize by the end of the day.

It’s a pipeline dream, but Revlon’s helping me get one step closer to it 🙂

View all posts by ms.cappuccino

Talk to me <3 Cancel reply

Looking for something specific?